“And if you must, then for performing this Yadnya, you shall offer me the Earth you just conquered”, Kashyapa’s voice was calm as the Maanasarovar.

He looked at him with utmost respect. Sage Kashyapa was not a man who’d joke around. So he rose from the ground. Previously he’d risen, like a flame from the most pious pier. But that was the time when he had to fight Kaartaveerya Sahasrarjuna and his cronies. Though only a few days had been passed since then, it felt like ages. And those days saw the metamorphosis of Rama, the youngest child of Sage Jaamadagni and Sati Renuka into the most feared Parashurama, the wielder of the fiercest battle-axe. He withstood all the hardships of the war only because of the training Kashyapa gave to him. So when this time he rose, it was out of devotion, love and affection towards his Guru.

He took some water from the Kamandalu in his hand and without thinking twice poured it into the feet of Kashyapa, who said,
“People earn, people spend. And in between, they give up some portion. Sometimes out of fear, sometimes out of respect and sometimes simply as a duty. But rarely anyone gives up everything he just earned, only because his Guru asked him to. You are rarest even amongst those, for you had rightfully earned this Earth through Blood and Steel, and yet you didn’t even blink once when it comes to renounce it”.

“Word of the Guru, is the word of Veda for me”, said Parashuram humbly.

“Then you must do one more thing for me”, Kashyapa said with a smile.

“Tell me, what it is and consider it done”.

“Listen, before you promise”.

“I give you my word and I’ll give my life to keep it”.

“Very well then. Since, you have given up your claim on the Earth, you don’t have any right to dwell in it. Therefore, as the rightful owner of the planet, I banish you from my land”!

‘But where’d he go?’, ‘If the earth is owned by Kashyapa, where’d Rama live?’, whispered the thousand spectators. But not Parashurama. His voice was the same as it was before hearing this dreadful wish of his Guru, when he said,
“As you please Gurudeva”.

And the Emperor left with his hands empty and a heart filled with the satisfaction of fulfilling his duty.

Kashyapa knew, if the order is to be restored on the Earth, it must be ruled by the Kings, not by a Sage who conquered it in the heat of passion. And this would happen only if the conquerer leaves. So he aimed for the greater good, with but a small sacrifice.

Parashurama understood the true meaning of his Guru’s wish. But he has bigger problem to solve right now; finding a piece of Earth, that is not part of the existing Earth! His thoughts wandered around this question and so do his feet, until he reached to an impasse.

Behind him was the earth, he was forbidden to dwell. In front of him was the vast ocean, which could have devoured anything and everything. Going back was not an option and going further was impossible. But impossible were the things he did conquer, from his very birth to single-handedly defeating the greatest Emperor of his time; all through his knowledge and might.

He stood in front of the ocean. The ocean looked fierce with the army of infinite battle-ready tides. The scion of Bhrugus was never the one to run away from a good fight. He took out his bow and mounted an arrow on it. He then remembered his father, the most revered Sage Jamadagni. He remembered his mother, the Goddess Renuka herself. He remembered his Guru Kashyapa who trained him to defeat everything labeled ‘impossible’. And then he remembered God Shiva who opened the secrets of Dhanurveda in front of him. He bowed to his ancestors of Bhrugu clan who withstood each and every trouble life threw at them. And with the might that destroyed the Haihayas, he released it.

The arrow sped to the sky and caught fire. Within a second it started to look like there are two Suns above, one that bestows the gift of life and another that would snatch it. The arrow crashed into the ocean with a huge explosion. And the ocean dried. It retreated back in a haste. And when the steam cleared, there was land. Land, that was never owned by anyone. Parashurama marched towards it.

In his Aashrama, Sage Kashyapa took a moment from his busy day and simply smiled. 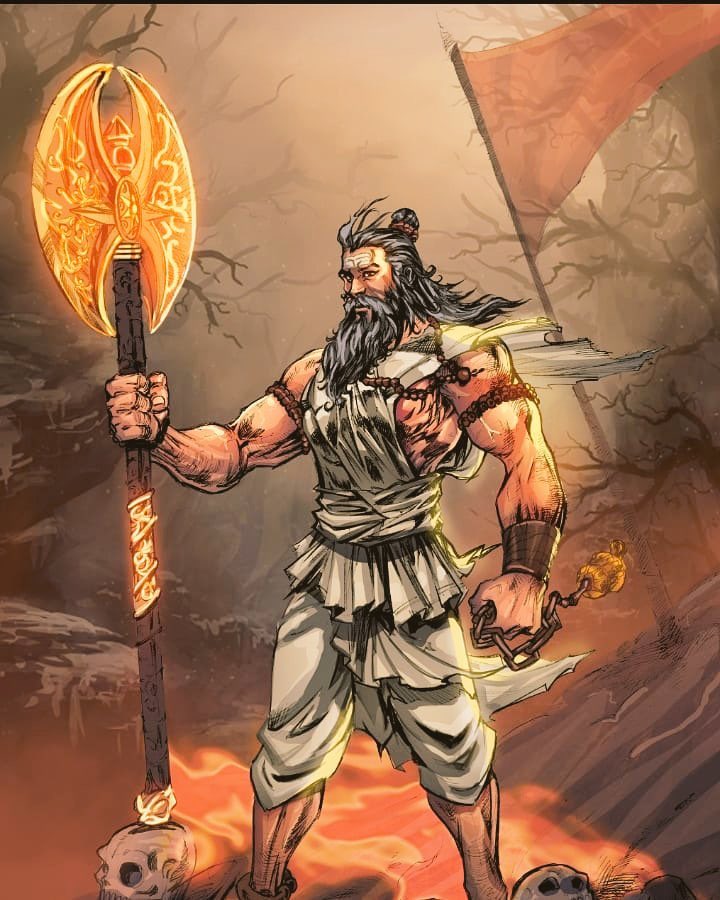